On May 1, 1820, Ferdinand David Schlüter and his cousin, Johann Georg Maack, signed the corporate charter of SCHLÜTER & MAACK. They laid the corner­stone for a company that continues to foster the virtues of Hamburg merchants today, as it has in the past.

The same code of trust, which the founding fathers took to heart in their overseas trans­actions, still applies at the company’ s modern office located on Hamburg’ s Stadthausbrücke. A network of international business connections has grown over the course of five generations which continuously allows SCHLÜTER & MAACK to explore new inroads, in addition to pursuing traditional avenues.

From the very outset, SCHLÜTER & MAACK has devoted itself to the ­challenges of world markets. During the period from 1820 to the beginning of World War I, the company’ s interest focused on trade with North, Central and South America. In addition to coffee, meat and cattle products, the company imported Chile saltpeter, which for ­centuries was highly ­coveted as the only raw material for the manufacture of aniline dye, explosive materials, fertilizer and sodium nitrate. In 1866, SCHLÜTER & MAACK took over the lucrative representation of the Liebig Company from ­Uruguay. For nearly fifty years, the ­company’ s ­legendary meat extract molded the corporate image, in addition to import of ­phosphate and ­ferrous sulfide.

The end of the First World War marked a major turning point in the ­company’ s successful corporate history. The trading company lost important overseas partners. Sailing ships, which had crossed the ­Atlantic since 1909, were confiscated as spoils of war, along with their cargoes. The import of coffee, which the company had initiated in the 1870’ s, came to a standstill.

Between the world wars – beginning of trade in rice and pulses

The post-war period with the adverse impact on trade caused by the Treaty of Versailles was the pre-war period of World War II with its political and economic restrictions. SCHLÜTER & MAACK used the sales organization from its idle coffee department and began trading rice and pulses in 1918. This business transpired in close cooperation with the London-based Edm. Schluter Co., which was established in 1858 – both companies have preserved their cordial relation to date. 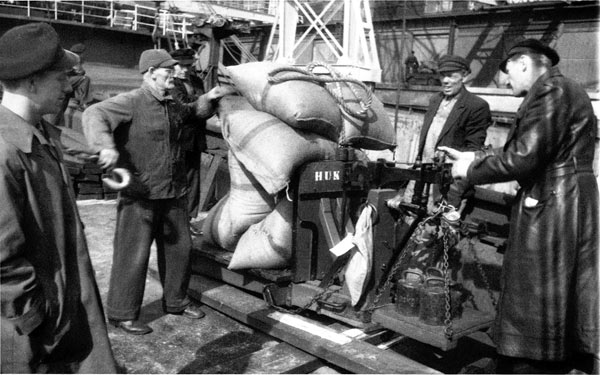 The success of sugar imports also benefited other business sectors

Until the end of the Second World War, SCHLÜTER & MAACK was preoccupied with new assignments within the scope of a government-regulated foreign trade policy that focused on providing the general population with foodstuffs. During this period, SCHLÜTER & MAACK placed main emphasis on sugar, a product which is still important to the company today. The company’ s success during this overall critical phase was based on over one hundred years of trading experience and the professional competency of corporate management.

Four thousand tons of sugar, stored at the company’ s own risk at the dawn of the currency reform, were the start-up capital after the end of World War II. The demand for sugar was immense in the wake of many years of deprivation and surrogate products. The loss of growing areas for sugar beets in Eastern Germany made imports necessary to meet domestic demand. Traditional export markets were served via purchases in Central and South America. SCHLÜTER & MAACK had not lost its good name internationally and experienced little difficulty in reviving its old international connections. Just three years after WWII the house had good business prospects.

The 1950s – Resumption of trade in coffee, pulses and sugar-based feed

Other business interests benefited from the success in sugar import. In the 1950s, the company managed to take up again its traditional trade with coffee, pulses and sugar based feed. The establishment of the European Economic Community in 1958 led to structural changes in foreign trade. SCHLÜTER & MAACK had to adapt to the new Common Agri­cultural Policy for Sugar: instead of distributing overseas sugar the company started distribution of sugar from neighbouring EEC ­countries.
And took up the export of German surplus sugar to world markets. Mean­while the expanding EU domestic market, with some 300 million consumers, presents the company with new challenges. Based on a tradition of over 200 years of international trade, the company explored new paths, in addition to pursuing its traditional avenues.

Experts in the trade with socialist countries, govern­ments and NGOs

Already in the early 1950s the company started the trade with ­socialist countries, especially GDR, USSR, Cuba, Czechoslovakia, Hungary, Poland, Romania, and Bulgaria. Also this sensitive mission confirmed the reputation of SCHLÜTER & MAACK as reliable partner. Based on the experience with government contracts SCHLÜTER & MAACK in the early 1990s became a major food supplier of international organizations for humanitarian aid projects. Based on a traditional global network the company gained a unique reputation as bridge builder between developing countries: SCHLÜTER & MAACK managed to source for humanitarian aid projects from developing and neighboring countries – even under the most difficult conditions.

Yet the company’ s good reputation was not only limited to ­foreign countries. In 1993 the company inte­grated a new trading team in Hamburg expanding the activities into nut kernels and cocoa: SCHLÜTER & MAACK Handelsgesellschaft mbH, a leading supplier of natural and processed nut kernels for the northern European ­industry, is today an affiliate company – with Rainer Lückenhausen and Can Blaase as further ­partners. The brokerage company HANSEATIC TRADING BLAASE GmbH has become a sister company in 2007.

SCHLÜTER & MAACK, through the acquisition of Richard Zoellner GmbH in 1998, has become a leading supplier of mustard seeds to the European mustard industry. A special crop mainly grown in North America and Eastern Europe – mustard seed complements very well the company’ s traditional area of pulses. Through the acquisition of Kruse Backsaaten GmbH in 2001 SCHLÜTER & MAACK complemented its activities in the supply of seeds for the bakery industry. In 2011 the company opened its first foreign office in Regina / Canada and has meanwhile added a receiving and processing plant for seeds and pulses. SCHLÜTER & MAACK Group benefits from synergies in sourcing, processing and distribution.

A sturdy house is built on a solid foun­dation and lessons learnt in the past have become modern building blocks for the present. Today our everyday life includes marketing of sugar, mustard seeds, pulses and nuts as well as working with agri­cultural producers and processors from around the world. And, a phone call to Asia has the same meaning as in the old days the final hand­shake closing a deal in Hamburg’ s old ware­house city.

IN THE WORLD AT HOME 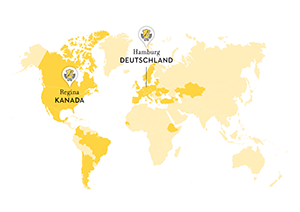